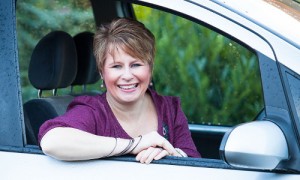 A mother who injured her back after a fall on holiday which left her unable to drive and taking up to 26 painkillers a day is now free of all her medication and has her life back.

Sonia Manser, 42, fell while on holiday in Nottingham earlier this year, aggravating an old back injury. She suffered such pain that she was left unable to drive, was unable to do her work at the Post Office and even had to crawl to the toilet.

Now after a short course of acupuncture the Ipswich born mother of two sons is off all her medications, can drive again, and is back to work.

Mrs Manser, who is married to 42-year-old Brian, a chef at a Stowmarket care home, said: “I fell while on summer holiday and the only way reduce my pain was to lie flat on my sofa. The pain was awful and I would rather give birth to ten babies than endure the pain I was suffering. I was constantly in tears, as soon pain killers wore off”.

“Then I went to see Annya and she has been absolutely brilliant. She could see how much pain I was in. After two to three sessions there was a 90% improvement, it was unbelievable, and after five to six acupuncture sessions, I felt brilliant”.
“I am now able to drive again, back at work at the Post Office, and feel so much better. I have my life back, it feels like a miracle.”

The exact origins of acupuncture are not known although there is speculation that stone age man used stone tools to press against painful areas of the body and as the craftsmanship to make metal tools developed, so did the needling techniques.

Written records show that acupuncture did develop in the East about 2,000 years ago and the early forms of acupuncture evolved in Asia.

Annya Stoddart, who runs the Pain Relief Clinic from The Green Room in Stowmarket town centre, said about 75% of her patients have back pain – either on its own or in combination with other problems like knee or hip problems.

Annya, who holds two degrees and who works with about 200 patients a year who suffer from back pain, said: “When Sonia first came to me she had pain down her back and her legs. Her feet had become numb and cold. She could not sit, walk or drive and lying face down was her only comfy position.

“Hospital tests had not shown up any problem so Sonia had been given anti-inflammatory, painkilling, anti-sickness and relaxant medication to help. She was taking 24 to 26 pills a day and she still rated her pain as 12 out of 10.

“I could see that the area around Sonia’s lower back was slightly swollen, and in addition other areas were very sensitive, which I treated. I am delighted Sonia is feeling so much better now.”

Annya, who benefited from acupuncture herself for pain, added: “When you are caught in the grip of pain, it’s hard to know what to do. Please contact me and I will help you feel better than you have for years.”

This site uses cookies to improve your experience. Read more.